Classic Cereals from the 80s

Saturday mornings just aren’t the same as they were in the 1980s. Back then, we were sugar buzzed and wired, even before the Smurfs came on, thanks to a plethora of super-sweet breakfast cereals containing zero nutritional value and a prevailing pop culture tie-in. Those deliciously epic boxes of goodness we begged our moms for every week in the cereal aisle, fueled us with magical colors and marshmallows that turned the milk every shade of the rainbow.  While many of the cereals are long forgotten, the beloved memories still remain. Here are just a few of those notable favorites from “back in the day.”

Nerds Cereal – With a cereal box that was divided into two separate compartments, we were left with the question, “Which side are you going to eat first?” The dual variety of blob-shaped fruity flavors resembled the tiny colorful candies we loved but had an even bigger crunch.

Ghostbusters Cereal – Who you gonna call? Crunch Bustin’ Fruit Flavor with Marshmallow Ghosts, of course! It wouldn’t be the 1980s without the Ghostbusters, and it wouldn’t be breakfast without ultra-slimy marshmallows

E.T. Cereal – Peanut butter and chocolate-flavored cereal pieces shaped in “E” and “T” was part of a complete 80s breakfast. This flavor combination was intentional as the character E.T. in the 1982 blockbuster hit can be seen eating Reese’s Pieces peanut butter candy.

Gremlin’s Cereal – Sticking with the movie theme, Gremlin’s Cereal had a taste similar to Cap’n Crunch, and encouraged kids to “satisfy their gremlin appetite” with the deliciously sweet Gizmo shapes. Even better, with two proofs of purchase, $9.95, and a plea to mom and dad, kids could send away for a Gizmo plush figure.

Pac-Man Cereal – Back in the ‘80s, when we weren’t at the movies, we were playing video games.  General Mills got in on the action with their corn cereal and marshmallow surprises, winning major points with kids everywhere.

Nintendo Cereal System – What better way to fuel a game of Super Mario then with a cereal made for the game. The box held two vertical bags – one side containing “Super Mario Bros. Action Series,” while the other side held, “Zelda Adventure Series.” Fruity-flavored and extra sweet, this cereal was seriously next level.

Here at Yizzam, we like our breakfast any way we can get it – especially when it’s in the form of fashion. So whether you’re pouring yourself a bowl of extra sugary crunch bites or super healthy cardboard flakes, we’re certain, as a cereal fanatic, you’ll dig our apparel too.  With designs such as Milk And Cereal Men’s Hoodie Sweater and Cereal Lover Breakfast Women’s Top, you can have your cereal and wear it too. It’s the best way to start your day! 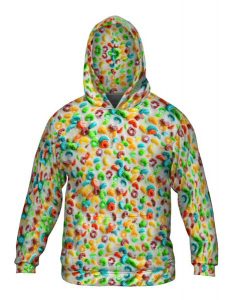 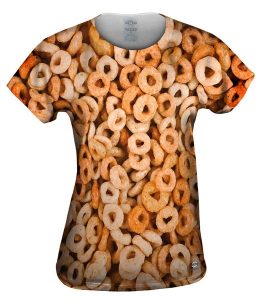