Regarded as one of Vincent van Gogh’s finest works, The Starry Night depicts the view from the Dutch painter’s asylum room window.  Everything from the attractive color palette and endless swirls to the overall captivation of the composition, are part of the enchantment behind this famous painting. Yet, be in its conception to subsequent success, there is so much more to this work of art than you might even know. Unless you’re an art history buff, you may not know some pretty cool information behind this incredible work of art. The following are some interesting facts about quite possibly the most famous piece created by the Dutch post-impressionist painter. 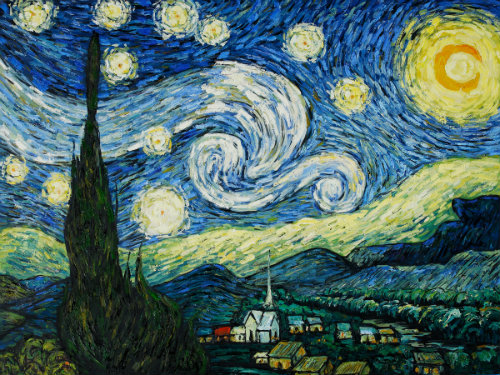 1. Yup, van Gogh was in an insane asylum, and this is the view

The troubled painter experienced a mental breakdown some time during the winter of 1888 and actually checked himself into the Saint-Paul-de-Mausole asylum near Saint-Rémy-de-Provence. He had enough sense to realize he wasn’t going to get any better on his own, and took the initiative to seek help. He often wrote about the view from his asylum window to his brother Theo. One time in particular he wrote, “This morning I saw the country from my window a long time before sunrise, with nothing but the morning star, which looked very big.” Lucky for us, the doctors and nurses let him have paints and canvas so he could paint his inspiration.

2. Of course, van Gogh didn’t include the iron bars.

One thing Van Gogh left out from his famous painting were the iron bars that separated his bedroom window from the freedom of the countryside. Some art historians suggest he painted in a studio on the building’s first floor that didn’t have bars, but he often wrote letters to his brother Theo mentioning the bars and the fact he painted in his asylum bedroom. So it can be surmised that he simply took the creative liberty and removed them from the painting.

Shocking, we know. Of course the globally cherished Starry Night was painted in 1889, but not everyone knows that the previous year, van Gogh created a painting known as Starry Night Over the Rhone. It is actually much different, but equally beautiful in its color palate and detail. In 1888 when he first arrived in Arles, France he was quite infatuated with painting the lights that filled the night sky. He first began with Cafe Terrace on the Place du Forum, before boldly creating his original Starry Night using the view of the Rhone River.

4. Van Gogh thought he totally bombed with this painting.

While everyone else believes the work to be a masterpiece, van Gogh wasn’t so sure. He once wrote (to Theo, of course), “All in all the only things I consider a little good in it are the Wheatfield, the Mountain, the Orchard, the Olive trees with the blue hills and the Portrait and the Entrance to the quarry, and the rest says nothing to me.” Wow! Although isn’t a little refreshing to know that even the most famous of painters are a little hard on themselves, too?

5. The village was mostly imaginary.

Sorry to be the one to break it to you, but there’s no way that van Gogh could have possibly been able to see Saint-Rémy from his asylum window.  Like all great painters, van Gogh had an incredible imagination. In a lot of his paintings he visualized the picture before he painted it – even if what he was painting was right in front of him. As far as The Starry Night goes, some historians even believe that the village in The Starry Night was pulled from one of van Gogh’s many charcoal sketches of the French town. Some even believe it to be a village in his homeland of the Netherlands. Very impressive! In any case, it isn’t actually something he could see from his window.

6. The painting may be about mortality.

Although at first look it is quite enchanting, and almost magical-looking, it isn’t all that meets the eye. In the foreground of the painting are cypress trees. For those who don’t know, these types of trees are ones that are most often associated with death and cemeteries. The painter, who loved looking at the stars once said, “Just as we take the train to get to Tarascon or Rouen, we take death to reach a star.” Although he was already struggling, being an asylum probably wore down his psyche a little as well causing him to consider his own mortality.  But that’s just what historians think. It was never actually confirmed that this painting is about death at all.

In the 1980s an art historian compared the Starry Night to a representation of what the sky would have actually looked like during the summer of 1889. To his absolute astonishment, the similarities were striking and proved that van Gogh’s “morning star” referenced in a letter to his brother was actually the planet Venus.

8. Brother Theo’s widow is responsible for the promotion of the famous painting.

When van Gogh died in 1890, Theo inherited all of his brother’s works. Then, when he died in 1891, his wife Johanna Gezina van Gogh-Bonger (telemarketers must have always gotten her name wrong!) collected and edited the correspondences between brothers for publication, and is the one credited with building van Gogh’s retrospective fame. Her tireless promotions of his work and exhibitions is undoubtedly the reason he was ultimately so famous.

9. After all, in his lifetime van Gogh only sold about two paintings. (And neither one was The Starry Night!)

One painting that van Gogh sold is barely known. The Red Vineyard at Arles, completed in November 1888, prior to the breakdown that caused him to be institutionalized, was purchased by Belgian artist and collector Anna Boch. She purchased it for 400 francs at the Les XX exhibition in 1890. Another painting that may have been sold was a self-portrait.

10. Your eyes are playing tricks on you.

Although it may look as though the stars in the painting are flickering, they actually aren’t (duh!), it’s just how the human brain works when it comes to accurate depiction of turbulence. Wild, isn’t it?

11. All it takes is a trip to NYC for you to check out The Starry Night for yourself

The Museum of Modern Art in Manhattan currently holds The Starry Night and has since 1941.

If a trip to the Museum of Modern Art isn’t enough, you can express yourself with the enchanting color palette of Vincent van Gogh’s Starry Night in Yizzam apparel. The emotion, vision and passion of the tortured and misunderstood artist can be seen in your own style as you wear this trendy Vincent Van Gogh Starry Night all over apparel with your favorite pair of jeans or anything else your heart desires.

Show off your love for the renowned Dutch post-impressionist painter and his famous work in this ultra-comfortable, all over print men’s t-shirt. This stylish tee is as perfect for a first date as it is for a day at the office. You can’t go wrong when we’re wearing such a colorful and celebrated print. This look comes in a comfortable and stylish women’s all over print t-shirt as well. 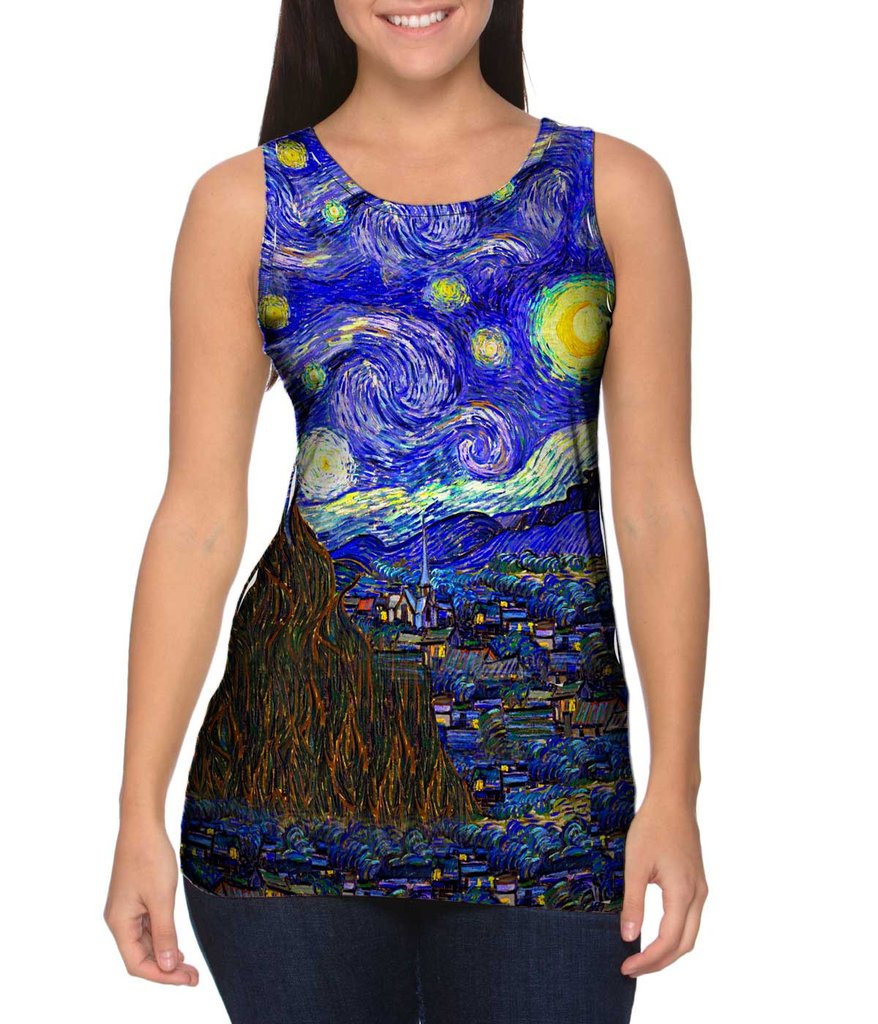 If you’re one who prefers to show off a little skin, than look no further than our Vincent van Gogh all over print tank. Whether you wear it alone or layered under your favorite jacket or cardigan, your style will surely be the star of the night. 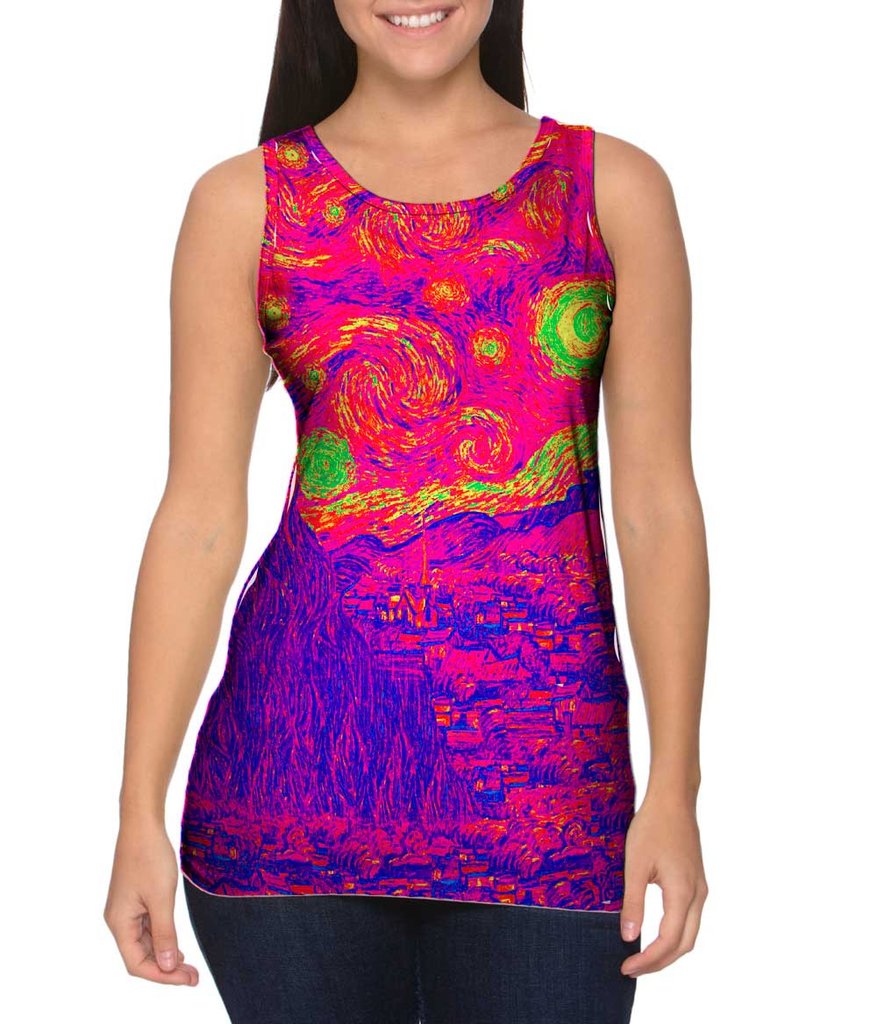 Love The Starry Night but want it with a twist? We’ve got you covered! We’ve taken the infamous print and gone pop art with it. This look is as wild as it is comfortable. Stylish and perfect for any occasion, you’ll love wearing this tank day or night. This pop art look comes in a variety of colors, even black and white, so be sure to check out the whole collection and pick your favorites! 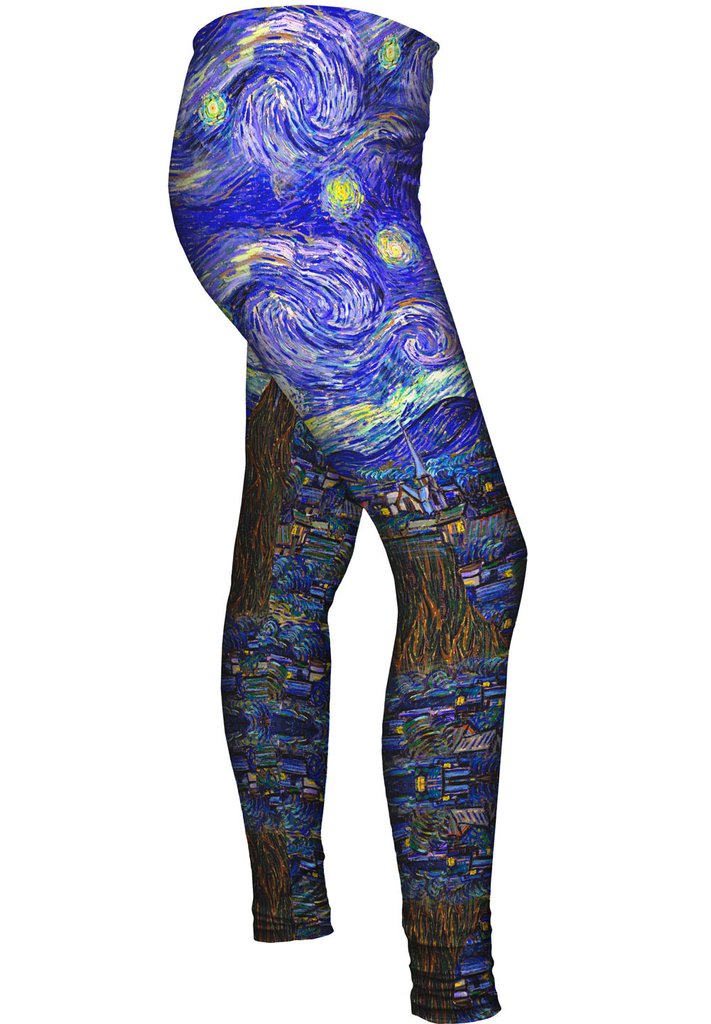 Had van Gogh known his painting would end up on leggings, he probably wouldn’t have had to be institutionalized! These leggings will turn heads as you wear them anywhere from the gym to the yoga studio to a night out. Comfortable and trendy, you’ll want to wear these all the time. Forget skinny jeans, these leggings pair well with just about anything! 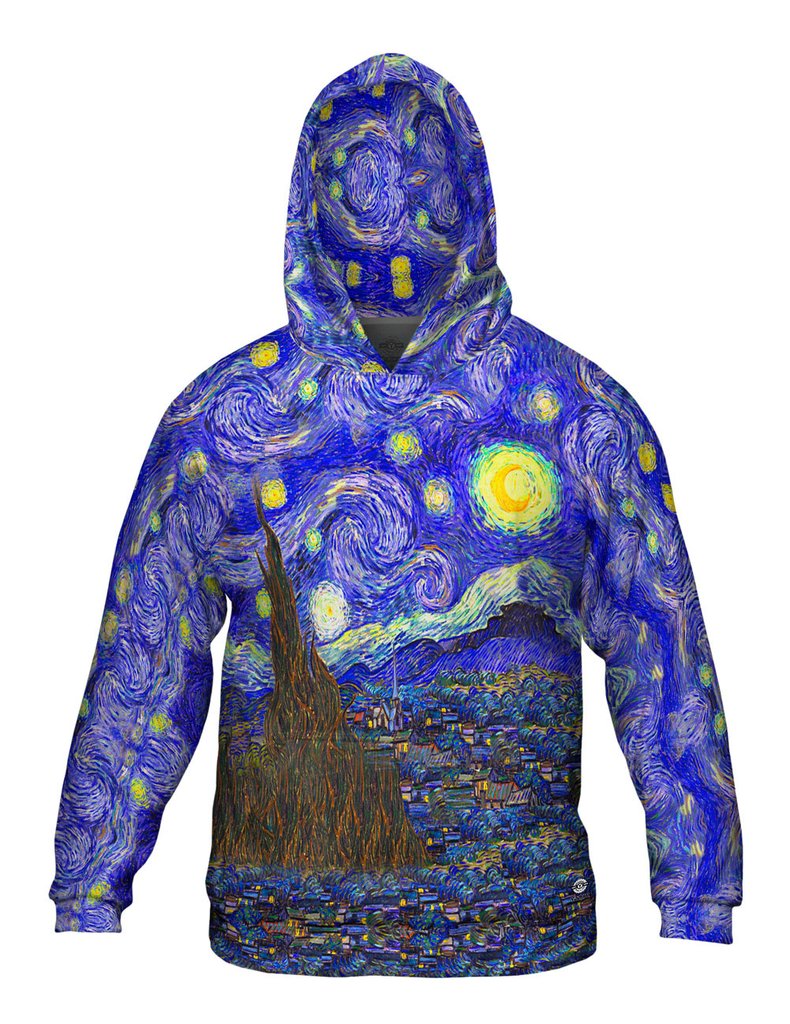