Facts You Never Knew About the Russian October Revolution

This year marks the 100th Anniversary of the Russian October Revolution. A century ago the Russian October Revolution was an attempt to create a fairer nation and confirmed the fate of the Romanov dynasty. At that time the Soviet Union was formed, which led to over 70 years of communist rule. Because the country uses the Gregorian calendar and not the Julian calendar (switched after the revolution), the October 24-25 anniversary will be officially celebrated this year on November 7 in Russia. If you’re a little rusty on your history, or just curious to learn more about this fascinating time in Russian history, here are 10 of the most interesting facts about the Russian Revolution of 1917.

#1 The Russian Revolution of 1917 Took Place in Two Phases

Although we are celebrating the Russian October Revolution, the Russian Revolution of 1917 actually occurred in two phases. One was in February and the other in October. The February Revolution led to the abdication of Emperor Nicholas II and the end of tsarist autocracy in Russia. Yet the October Revolution, led by the Bolsheviks, ensued in the establishment of the first Marxist state in the world with Vladimir Lenin as its leader.  While many factors are considered causes for the Russian Revolution, the most popular include the advent of the First World War, inept leadership of Nicholas II, and poor conditions of industrial workers.  The immediate effect of the revolution was the disastrous Russian Civil War which caused millions of casualties – and estimated 7 to 12 million!

#2 The Russian Revolution was prompted by World War I

World War I led to severe disruption of the political and economic crisis in Russia. The terrible losses in the war played a huge role in the revolts and uprisings that began to occur.  Soldiers lacked supplies, went hungry, and suffered disgraceful conditions.  Despite perfectly fine harvests, food scarcity was a huge problem in Russia. In order to finance the war, the dishonorable government printed millions of ruble notes, and inflation hit big time by 1917. Prices increased up to four times from what they were in 1914. Riots were constantly breaking out over the lack of food, and rising prices led to demands for higher wages. When workers didn’t get the pay they wanted, strikes were rampant.  The First World War thus pushed an already unstable Russia towards revolution.

Tsar Nicholas II’s response to the 1905 Revolution was to order constitutional alterations including Russia’s first elected parliament known as the State Duma. However, because he annulled an agreement and dismissed the first two Dumas when they proved disobliging, he smashed the hopes of any kind of democracy for the Russians. This only fueled revolutionary ideas and violence targeted at the Tsarist regime. Additionally, even though Russia was completely unprepared, Nicholas II dragged Russia into World War I.  The losses Russia faced were staggering with nearly 3.3 million killed. Nicholas II was responsible for going into a war from which it had nothing to gain.

#4 The Bloody Sunday Massacre Contributed to the 1917 Revolutions

Not just a really great U2 song, the Bloody Sunday Massacre was a huge reason behind the 1917 Revolutions. By the early 20th century, Russians were already extremely disappointed in the tyrannical regime of Tsar Nicholas II. Due to their dissatisfaction, defenseless demonstrators led by Father Georgy Gapon, decided to protest on Sunday, 22nd January 1905.  They all proceeded to march towards the direction of Winter Palace to appeal Nicholas II and the issues facing the working class such as long work hours, horrific working conditions, and inadequate wages.  Soldiers of the Imperial Guard aimed gunfire on the demonstrators causing an estimated 1000 dead or wounded casualties. Known as Bloody Sunday, this led to a strike movement spreading throughout the country. This movement is considered the start of the 1905 Russian Revolution, which led to a surge of disdain for the Tsar, and amplified revolutionary activities in Russia.

To say the condition of Russian peasants was poor, would be an understatement. It was downright devastating. Their agricultural techniques were archaic, they were almost all completely illiterate and they had to pay the state redemption payments. These peasants were jealous of and resented the rich landowners who profited off the land without ever working on it themselves. And, in the late 19th century and early 20th century there was rapid industrialization, which led to severe urban overcrowding. Yet, Tsarist Russia was still way behind Europe leaving few opportunities for the poor already suffering from overcrowded housing, deplorable sanitary conditions, and inadequate wages. Because the working class was extremely political aware and more likely to revolt than the peasantry before them, the atmosphere was much more conducive to socialist revolutionaries.

#6 February Revolution of 1917 ended the Tsarist autocracy in Russia

On February 26, Nicholas II ordered the army to use force to suppress rioting. There were 180,000 troops prepared at the capital, however most were injured and untrained.  Additionally, many in the Petrograd barracks were actually compassionate towards the crowd and sympathetic to the revolution. They refused to fire at the crowd contained many women. Some soldiers did open fire and killed many demonstrators while other protesters kept to the streets. The following day regiment after regiment of the Petrograd barracks deserted to the cause of the demonstrators.  By the night of February 27th, at least 60,000 soldiers joined the radicals. Tsar Nicholas II was forced to relinquish on March 2. This brought an end to Tsarist autocracy in Russia.

#7 The revolution in February was followed by Dvoyevlastiye

Once Tsar Nicholas II resigned, the State Duma picked a Provisional Government to follow the autocracy, which was led by Prince Georgy Lvov. Just a few days prior, the Petrograd Soviet, a symbolic party of the city’s soldiers and workers was formed. From March to October of 2017, the two competed for control and power, which lead to a situation known as Dvoyevlastiye or “Dual Power.” Yet, Petrograd Soviet had marked its authority earlier when it issued a command stating the military needed to obey only the orders made by the Military Commission of the State Duma, which didn’t object to the orders of the Soviet. The Provisional Government was inept at countermanding the order.

#8 The October Revolution was led by the Bolsheviks

The October Revolution, the second of the Russian revolutions of 1917, was founded on Vladimir Lenin’s writing of Karl Marx’s ideas. This created a political philosophy known as Marxism-Leninism. Essentially, this ideal seeks to create socialist states. In contrast to the February Revolution, the October Revolution was a result of thoughtful planning and organized activity. On October 24–25, Lenin led the leftist revolutionaries and launched a nearly peaceful coup d’état against the Provisional Government. The Bolsheviks and their allies occupied everything from telegraph stations and government buildings, to other tactical points in Petrograd. Kerensky’s effort to organize resistance proved pointless, and he ended up leaving the country. A new government quickly formed, which was headed by Vladimir Lenin.

Because of the Russian Revolution, the first Marxist state in the world began with Vladimir Lenin. Thanks to him, peace was made with Germany, land was distributed, and industry nationalized. In 1918, the former ruler of Russia, Tsar Nicholas II,  his wife and five children, were all executed by the Bolsheviks.  Perhaps the most poignant   repercussion of the revolution was the Russian Civil War. The Red Army fought the White Army. By 1920, the anti-Bolsheviks were conquered, and in 1922 the Union of Soviet Socialist Republics (USSR) was developed. The causalities were extremely high – approximately 12 million during the civil war. Making it one of the worst national wars in history. Catastrophic is right!

#10 The Global Impact of Russian October Revolution was Huge

The entire world felt the impact of the successful Russian Revolution. As a result, political unrest and revolts occurred in several countries including the Hungarian Revolution and the German Revolution. Practically all of the revolutionary activities were anti-colonial or socialist in nature. Though some of the organizations were met with immediate success, not one Marxist revolutionaries were able to keep power to themselves in their own hands. It wasn’t until WWII when the soviet victory caused rapid creation of communist states. The revolutionary wave that occurred during and after the 1917 Russian Revolution is most often known as the Revolutions of 1917–2.

Hungry for all things Cold War and Soviet Union? Celebrate the 100th Anniversary with us in Our Comrade Collection. With prints like our Karl Marx Komp-Chemnitz t-shirts, Comrades Work Together t-shirts, and Flag of the Soviet Union, we have everything you need to show your support of Russia and its history. 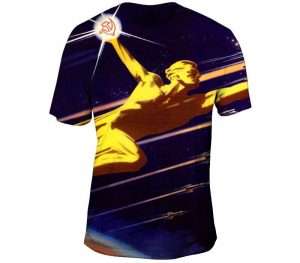 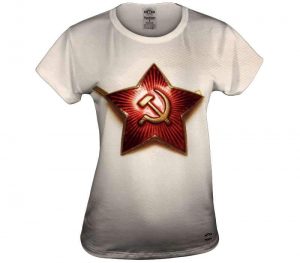 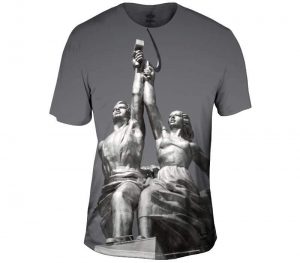 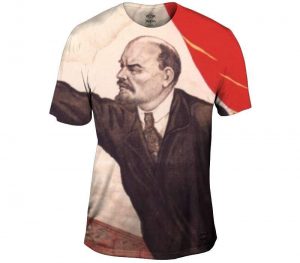