The Stars & Stripes of Fashion

Lately, it’s hard to go anywhere without politics coming up in conversation. And although politically we may not all agree, one thing is for sure, the American Flag continues to be a beautiful representation of independence, patriotism, and nationalism.

The eye-catching red, white and blue is increasingly becoming popular in American culture as a fashion trend, too. Over the past few decades, wearing the American flag has gone from an act of protest to an act of patriotism. Everyone from celebrities to veterans are choosing to wear the flag in support of all things United States of America.

Here are some celebrities expressing themselves in their own interpretation of Americana by draping in the stars and stripes.

This singer may be “Chained to the Rhythm,” but she’s also pretty attached to her American Flag clothing. The politically-active pop star can regularly be seen in bikinis, miniskirts and t-shirts sporting the patriotic print.

Another pop princess who is no stranger to the spotlight, loves her tattered American flag look on stage. Last year the California-born singer showed up to a Fourth of July celebration with neon-colored hair and wrapped in an American Flag print dress.

With a song that literally touts his patriotism, the self-proclaimed American cowboy shows no shame in regularly wearing American flag prints in the form of t-shirts, shorts, and bandanas.

Weezy finds himself in controversy almost as much as he finds himself wrapped up in the American Flag. So his video shoot for “God Bless Amerika” in New Orleans, was just another day in the life of the rap star. He swears he is one of the most patriotic people you could ever meet, and his long board shorts are pretty convincing.

The forever-classy Grammy winner may not be able to keep a guy for very long, but she effortlessly manages to romance her American flag print style season after season. Whether she wears an oversized sweater or a cute tee, Taylor is about as American Girl Next Door as it gets.

We too believe in life, liberty and the right to wear flag prints. If you want to join the likes of rappers and crooners, we’ve got you! Get the star-studded look with our American Flag Men’s T-Shirt or American Flag Women’s Leggings. Both would look great paired with a classic denim jacket. Or, if you’re feeling extra patriotic, go for our Flag Eagles Men’s Sweatshirt. What’s more American than eagles wearing the flag print too? Get these wardrobe must-haves and celebrate your freedom to be fashionable! 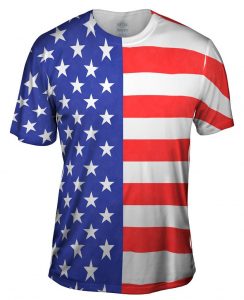 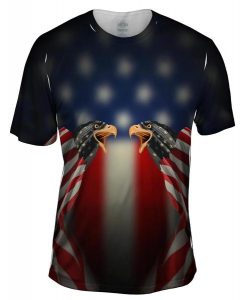 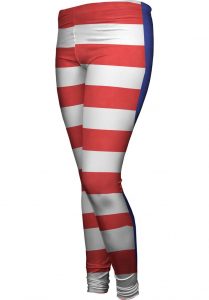