We all know it, love it, and practically lived on it in college. Chances are there’s a stash of it in our kitchen cabinets right now just in case we need a quick snack or easy meal. We’re talking about ramen noodles, that irresistibly satisfying comfort food that is just about the simplest thing you can prepare without fail. The price is right and the taste is good so we’ve put together some cool facts about instant ramen. They are perfect for pondering while you wait those painstakingly long five minutes for the noodles to cook.

On average, Americans spend about $7000 on food every year, but if you chose to live on instant ramen for a year, you could do it for approximately $200. Yes, you heard that right! Because those packages of noodles, complete with the tiny packet of seasoning, are roughly 25 cents each (and even cheaper if you buy in bulk!), you could easily eat for a year what most people spend in one trip to the supermarket. Of course, we don’t really recommend it. Ramen noodles don’t contain all the nutrients your body needs and, let’s face it, you’d probably get really bored with that meal plan after a couple weeks. But the point is, it’s a cheap way to eat when you’re in a pinch.

2. The noodles are really long

If you’ve ever wondered just how long the noodles are in an instant ramen packet, you’re not alone. That’s why instant ramen was officially measured at 167 feet. That’s the equivalent of two basketball courts of delicious ramen yumminess.

3. It took Momofuku Ando an entire year to perfect the recipe

The Japanese inventor spent an entire year researching recipes and eventually came up with instant ramen on August 25, 1958. Cup of Noodles was later invented in 1971. His invention completely transformed instant noodles into a global food. In an effort to honor the inventor, the CUPNOODLES museum in Osaka Ikeda, Japan (the birthplace of instant ramen) welcomes hardcore ramen lovers from all over the world every year. The museum even has a model factory that allows guests to do a little experimenting of their own. With over 5,500 flavor combinations available, visitors can try a variety of instant ramen flavors. But despite the numerous options, Ando was partial to his first recipe stating that the key to long life was eating Chicken instant Ramen every day.

Just before his death, Momofuku Ando created a vacuum sealed package of ramen that had smaller noodles and thicker broth. He had no idea it would be eaten in space, but the new packaging and consistency made it the perfect thing to bring along for astronauts headed to zero gravity conditions. Japanese astronaut Soichi Noguchi packed some of the special “space ramen” with him for his trip on the Discovery space shuttle.

Ramen noodles were inspired by the Chinese lo mein noodles, which came first. The boiled noodle dish was invented centuries earlier but the easy cooking and delicious taste were intriguing to the Japanese. Interestingly enough, China eats more instant ramen than any other country. According to the World Instant Noodle Association (it’s real, folks), last year China ate over 50 billion packages of ramen. Instant ramen is sold everywhere in China including right on the street.

6. Some people eat it raw

For some, waiting that 5 minutes is just too long to enjoy the delicious taste of ramen. They want to dive right in and consume it crunchy and raw. David Chang, famous chef and founder of the Momofuku restaurant empire says that since he was a kid he has loved sprinkling the seasoning right on to the crunchy stack of dry noodles and biting into the chunk as if it were a huge potato chip. Mmmm!

7. It used to be considered a luxury item

In Japan slurping your soup is not considered rude at all. In fact, they expect you to! They believe the best way to eat ramen without burning your tongue is to slurp the noodles so they cool before you swallow them. But it is considered rude to chat while eating because it takes away from all the hard work the chef put into the meal.

There are a ton of recipes on the internet that prove it’s actually quite easy to make a gourmet meal from a package of instant ramen. For example, you could add veggies and make a ramen stir fry, add the noodles to chili, toss the noodles (cooked or uncooked) in a salad, or drizzle chocolate syrup on top for a quick and easy dessert ramen. All ramen lovers know that the creative possibilities are truly endless.

Because instant ramen is cheap and easy to make, it’s very popular with the inmates. Plus, that little seasoning packet can be used to spice up other bland prison meals.

11. Eat it in moderation

The not-so-great news is that ramen isn’t all that healthy. So you might want to take that above fact about it being super cheap to live on for a year with a grain of salt. Actually, wait! That’s the problem…the tiny packet of seasoning is packed with 1,820mg of sodium – well over half of the daily salt recommendation! It’s also been linked to cardiometabolic syndrome in those that eat it more than twice a week. Also the preservatives in instant ramen known as Tertiary-butyl hydroquione (we’re glad we don’t have to say it) are commonly used to extend the shelf-life of food can give you a tummy ache.

Although you may not want to eat ramen every day, you can still prove your love of the tasty noodles with all over print apparel from our Ramen Noodle Rockstar collection. Unlike real ramen, with this must-have print in your wardrobe, you’ll be ready in under five minutes! 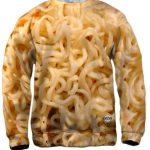 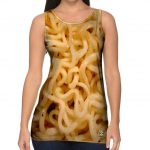 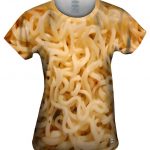 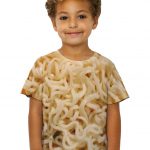