9 Reasons Why We Unironically Love Vaporwave

For any person who is uninformed, confused or completely left in the dark about what “Vaporwave” even is, here’s a brief explanation. Started under the name of “Seapunk” as a joke on Twitter, Vaporwave blew up to what it is today – a subgenre of music and art with a heavy political, satirical and artistic agenda.  Using sounds and images from the 80s and early 90s, Vaporwave essentially is a critique on the major consumerism of that era while reviving the nostalgic and often empty feelings that come with that propaganda.

While much of the art is lifted from other art, making the old saying, “steal like an artist,” ring true, it’s hard to ignore Vaporwave’s influence on conventional artists and musicians.  Many of the people who argue that Vaporwave is uninspiring and ostentatious are simply turned off by the fact that artists of this genre blatantly steal 80’s art and songs and simply slow them down with very little effort required. Although the genre might not be for everyone, here are some of our top reasons for loving it. 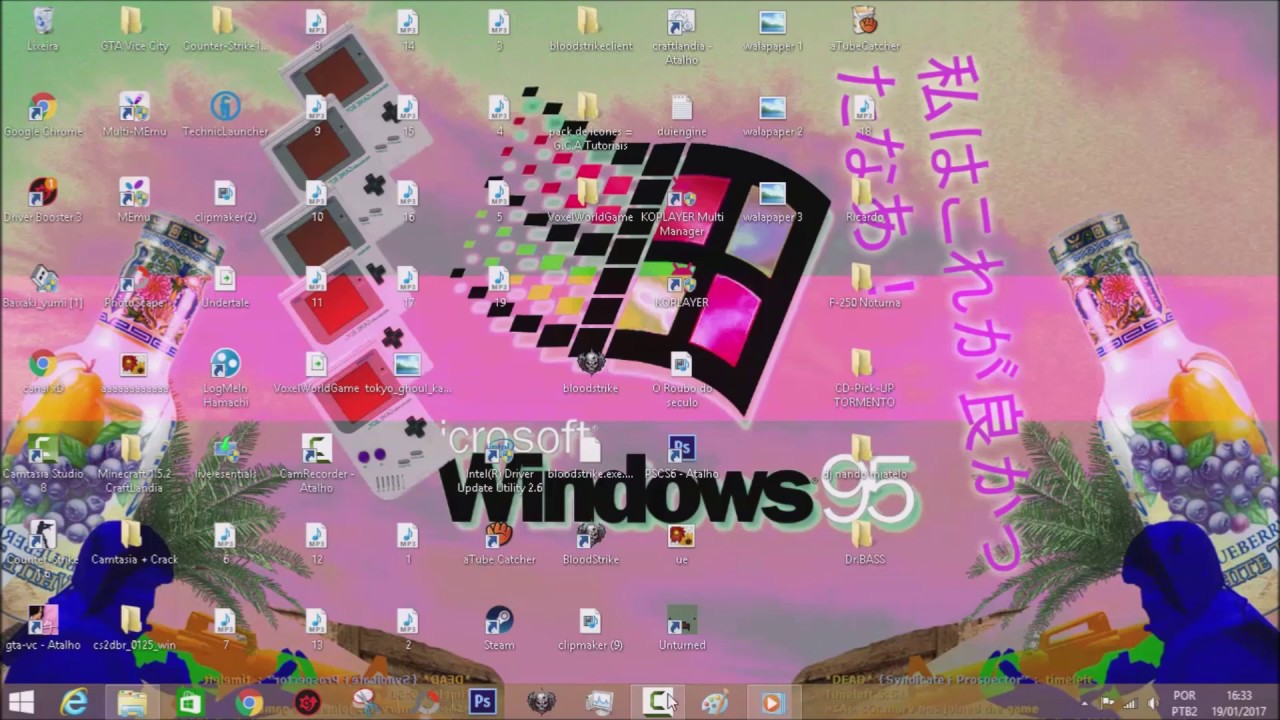 1. Vaporwave’s constant relevance and transcendence to the mainstream

As far as the art goes, the Vaporwave aesthetic frequently relies on 2D and 3D computer generated graphics. Often geometric in nature, appearing extremely pixelated with a nod to early 80s PC graphics and purposefully distorted to give the impression of television static or a VHS tape with tracking issues. In a world of technology that is constantly updating and changing, the endless reverence to some of our favorite stuff from the 80s is welcomed. Vaporwave continues to transcend the manstream by going backwards and we can’t get enough. Obsolete graphics, old computer systems, and archaic logos like that of Windows 95 are all part of the popularity behind Vaporwave art. What’s old is new again and Vaporwave artists are ensuring that we don’t forget that. 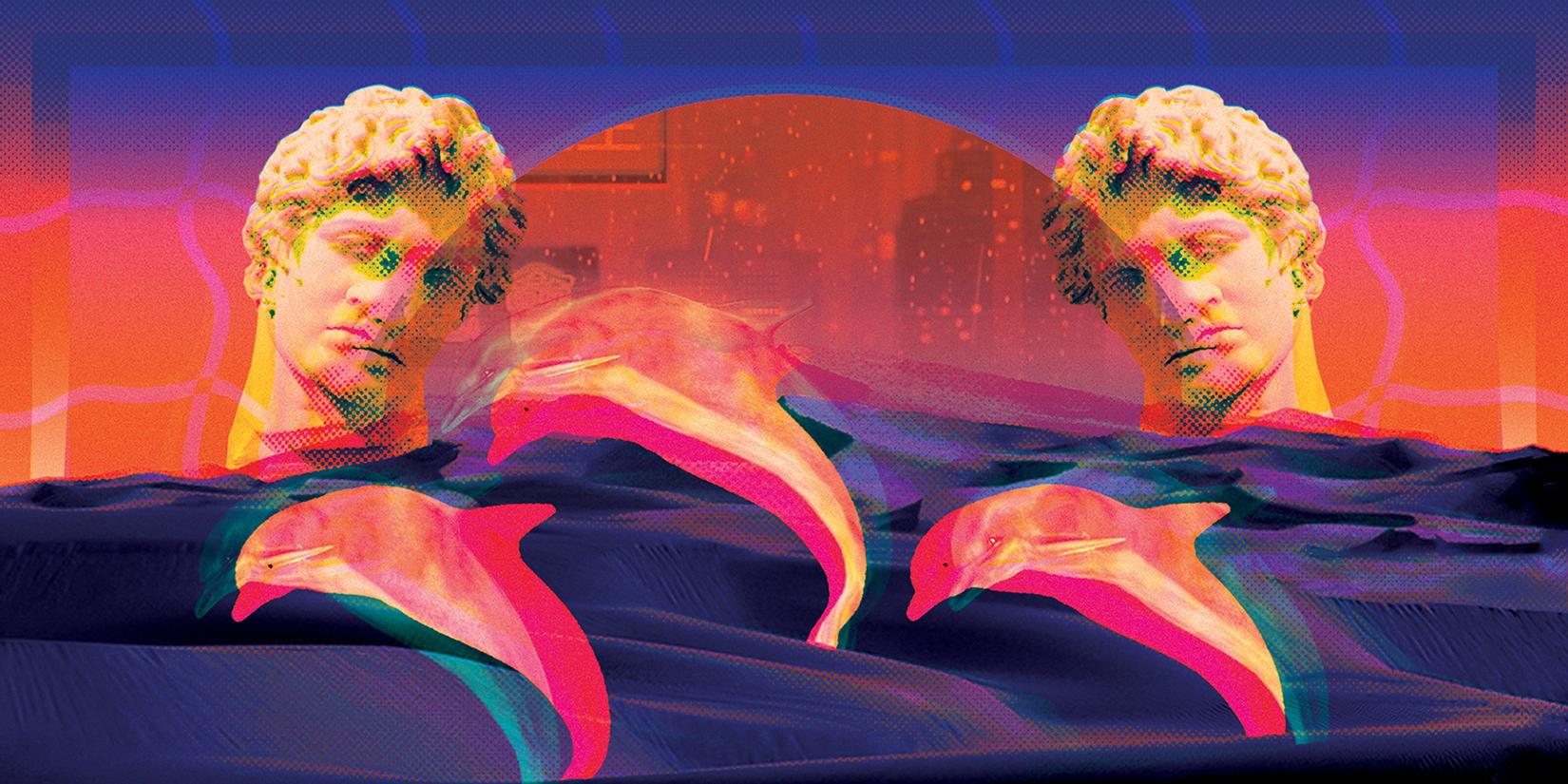 2. Vaporwave’s mark on the history of music and art

Vaporwave can be discovered in everything from art and music to fashion. We’re particularly fond of the fashion part! Because of its incorporation of the past, present, and future, some have even taken it as far as to name it the aesthetic. Despite a few naysayers who think the art form is dead, we believe it is absolutely alive and well, and ready to stay with even further developments in music, art and of course, fashion.

The consumerist culture reached extreme heights during the 1980s and Vaporwave art and music frequently references that time by utilizing advertisements, television commercials, and corporate logos throughout the art.

As far as Vaporwave music goes, some have compared the sound to muzak–the universal nondescript background music frequently played in elevators, malls and stores. Therefore some have made the connection that a Vaporwave subsidiary of music called Mallsoft adds to Vaporwave aesthetic in such a way that leaves the listener feeling as though they are walking through a spacious mall. Again, satirically playing off of mass consumerism. 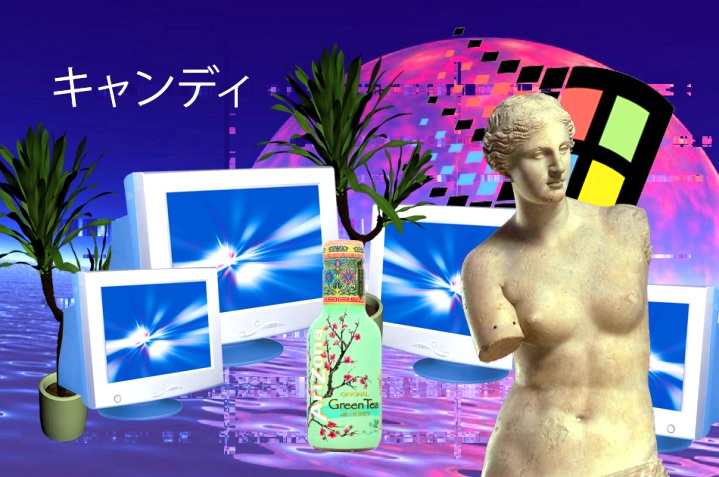 Ask any Vaporwave artist or musician and they’ll be the first to tell you that, while flat out plagiarism is never okay, borrowing and recreating what other artists have done is totally fine. Encouraged, in fact. The goal of the Vaporwave artist is to take what has been done before them and do whatever they feel necessary to improve or revive the piece.

Vaporwave consistently builds on retro imagery, while taking it into a cinematic direction with  landscapes filled glowing neon signs.  In this way, the core principles of the Vaporwave aesthetic are used to guide us through imagined experiences or landscapes and move one emotionally. But remember, the Vaporwave movement is still quite young, and itself is consistently changing as it evolves and more people are exposed to it – continually adding their own ideas to the aesthetic.

5. It was created by people who weren’t even alive in the 80s or early 90s

Many of the Vaporwave artists were born in the late 90s and early 2000s, and therefore they have an over-romanticized idea about what life was actually like during the 1980s. Some could argue that their level of nostalgia is more wistful lust for an age they never truly knew, making their art even more fascinating and appealing. Capturing the essence of the 1980s while contextualizing the past through imagery and sound samples of the era, is at the heart of the Vaporwave aesthetic. 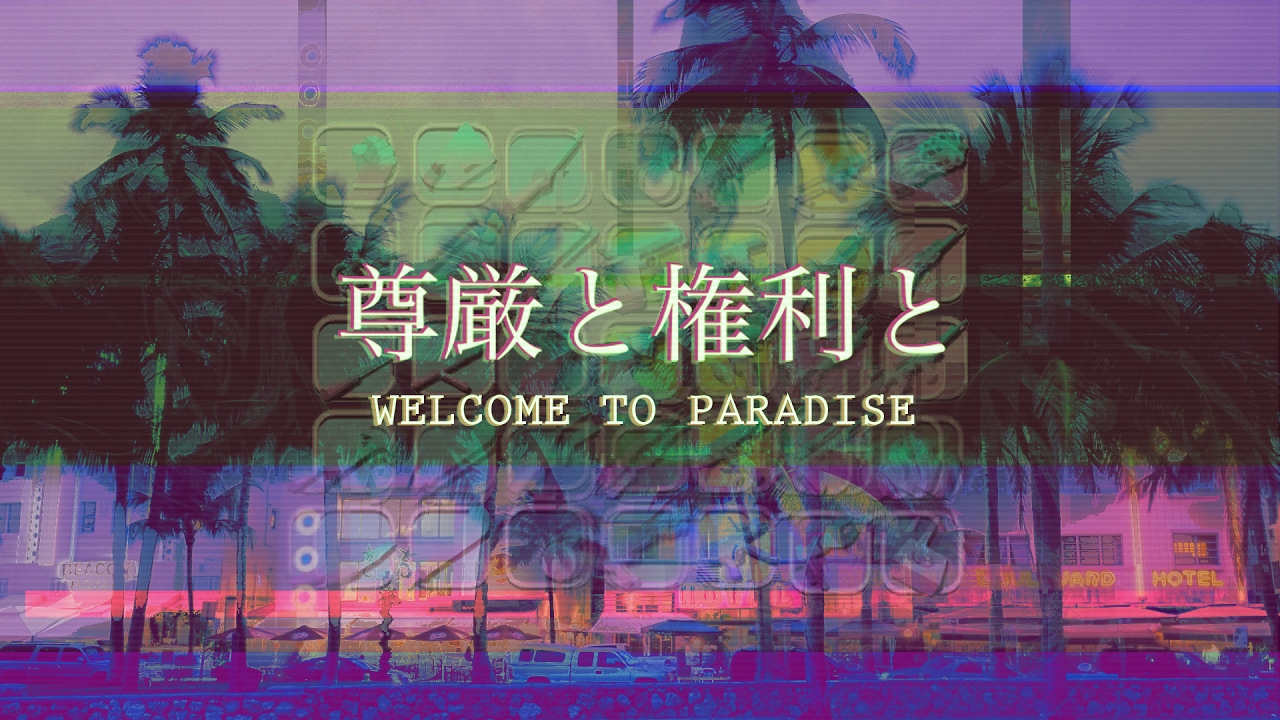 Along with its obsession with all things history and the past, Vaporwave incorporates sounds, imagery and multi-faceted forms of media from East Asia and Japan.  Frequently vintage in nature, these sources are vast. Sometimes the artist will simply utilize Japanese characters to label a song or assimilate them throughout their art or graphical design.

With a focus on numerous cultures, there’s no doubt that Vaporwave is one of the first aesthetics known worldwide. Rather than originating from any one culture or specific country, the style developed globally by artists who connect online sharing ideas.

Defined by slowed down song samples and loops of eerie, droning effects, Vaporwave music evokes the mood of a slow, relaxed vibe with deep, bass-inspired sounds and strange vocals.  While slowed music can sometimes be disturbing to listeners, many hype that aspect to be the best part about Vaporwave. The low, gloomy sounds can provide an oddly soothing effect and when paired with vintage imagery, the art proves to be truly powerful.

Surprisingly enough, despite the fact that Vaporwave borrows from other artists and uses images and sounds from the past, the art and music itself are nothing like we’ve ever seen before. The uniqueness of the aesthetic is what make it a genre so special and intriguing. 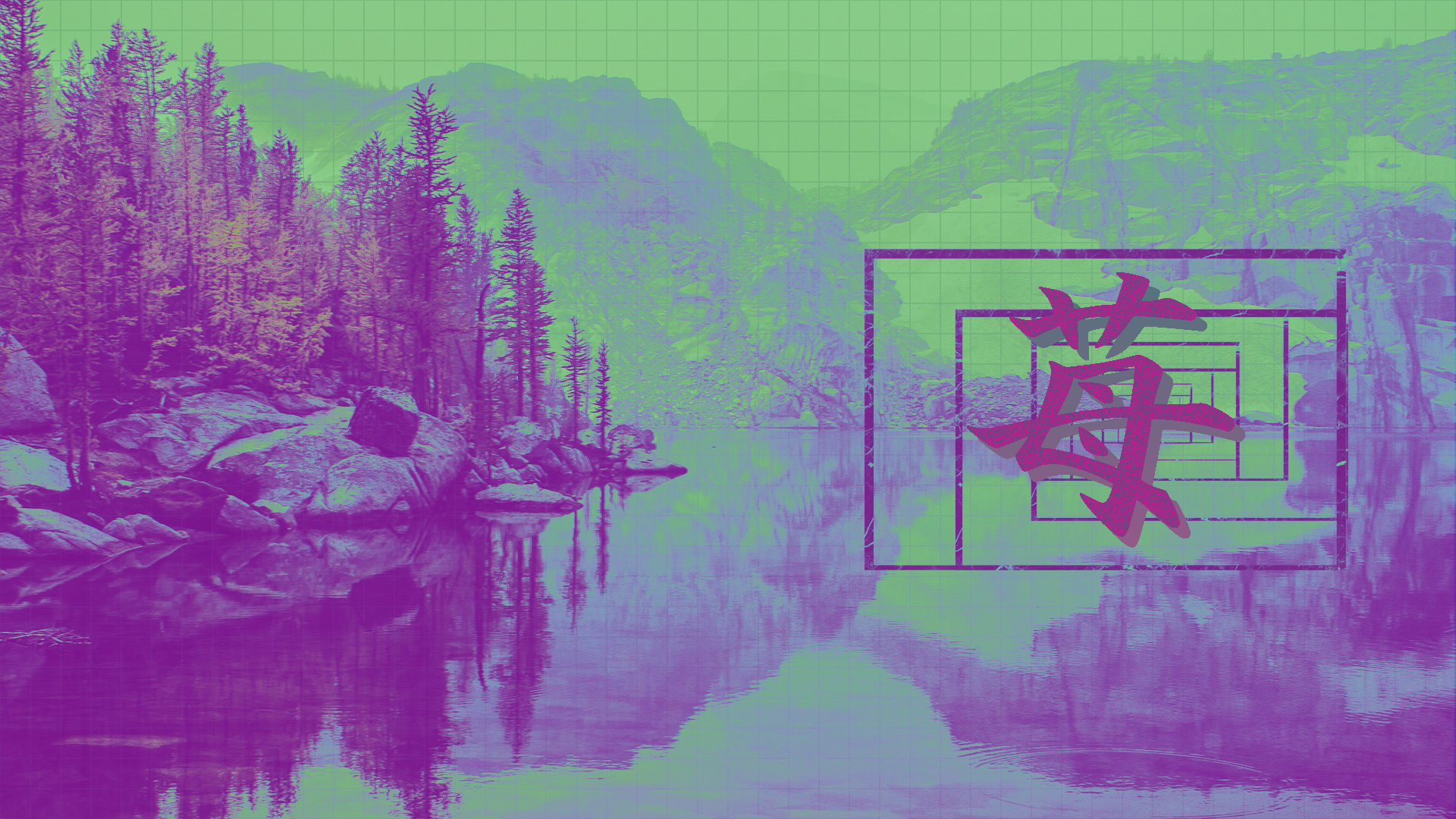 Vaporwave art is extraordinarily colorful and makes for amazing fashion. The aesthetic palette typically falls into two categories. The first category is much brighter and focuses on the use of pastels such as greens, turquoise, pinks and light blues. Commonly, scenes of oceans and beaches lined with palm trees combined with contrasting stark offices dotted with potted ferns and malls.

The second is almost black, yet emphasized with lines of purple, greens, and shades of pinks. Generally, this particular palette is used to portray city scenes in early evening or in the middle of the night. Neon signs glow and cut through the blackness by providing vibrate, colorful scenes.

At Yizzam, we have no doubt that Vaporwave will always remain passionately unique and popular.
After all, Vaporwave isn’t simply about feeling nostalgic, it is about going into the ideal wasteland that was so delicately set up for us by the consumerism of the 1980’s and offering a window into the empty shell of a world as it exists today. Deep, we know. So sit back, relax, turn on some Vaporwave music and check out our own satirical take on consumer capitalism generously mixed with pop culture in our epic Vaporwave collection.

Saying this art makes for incredibly delicious apparel is an agonizing understatement.  From tops to tanks, our collection proves that aesthetics never looked so good. 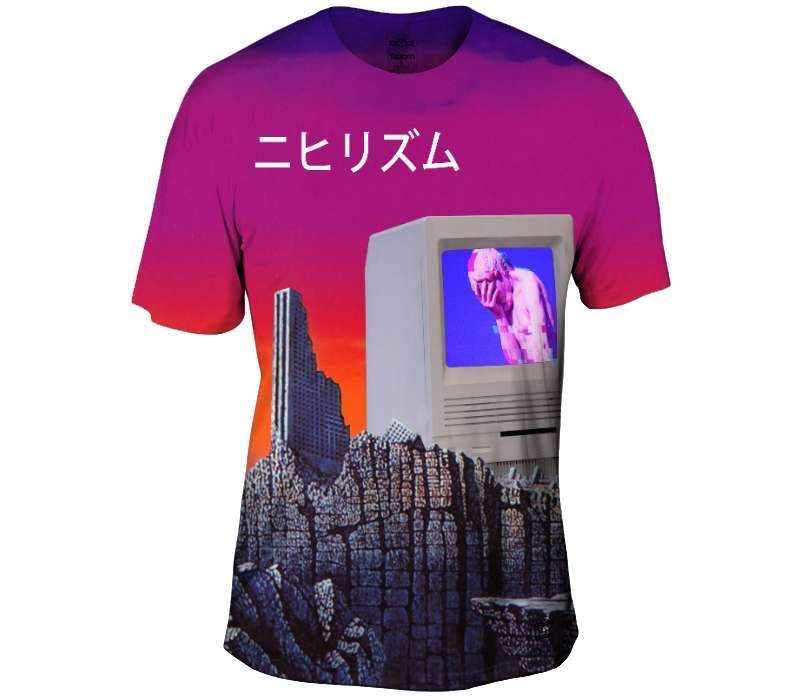 Apocalypse and The Nihilism Mens T-Shirt

Complete with an 1980s computer, this design satirically suggests a rejection of religious and moral principles while utilizing vibrating color of purples and dark hues. 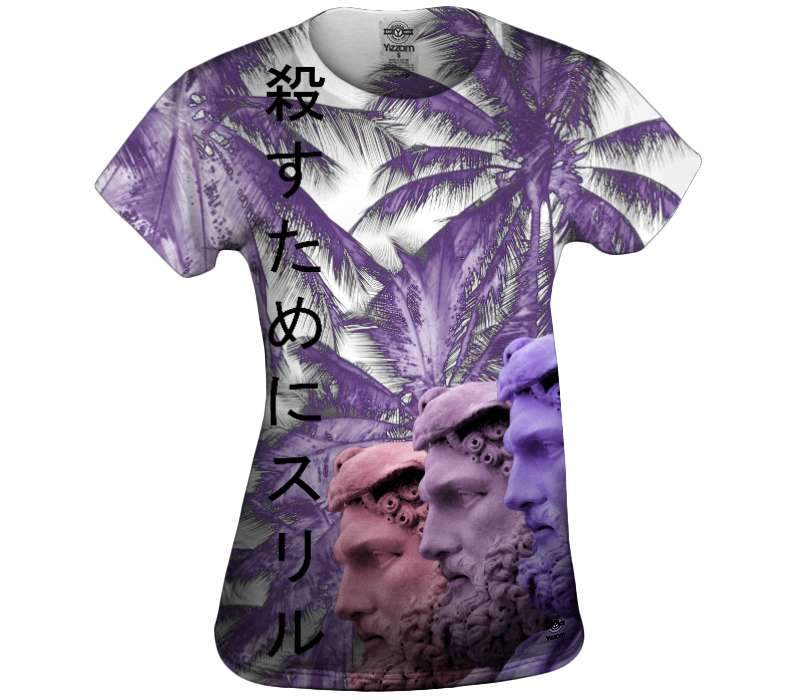 Japanese characters, palm trees, statues and purple hues, this design is the epitome of Vaporwave and we can’t resist wearing it with just about everything. 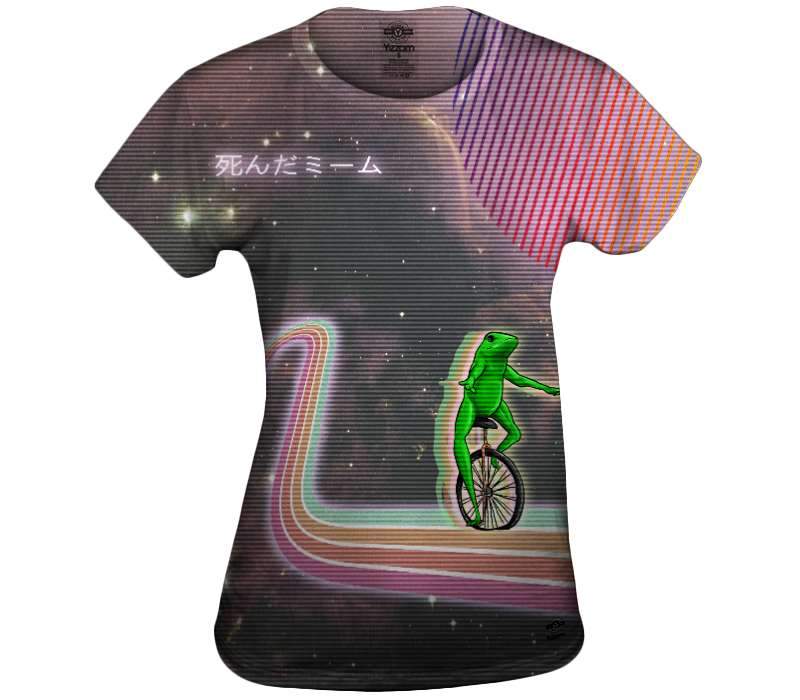 If a frog riding a unicycle doesn’t hook you, we don’t know what will. Embrace the nostalgia and satire of Vaporwave with this print that perfectly embraces the aesthetic. 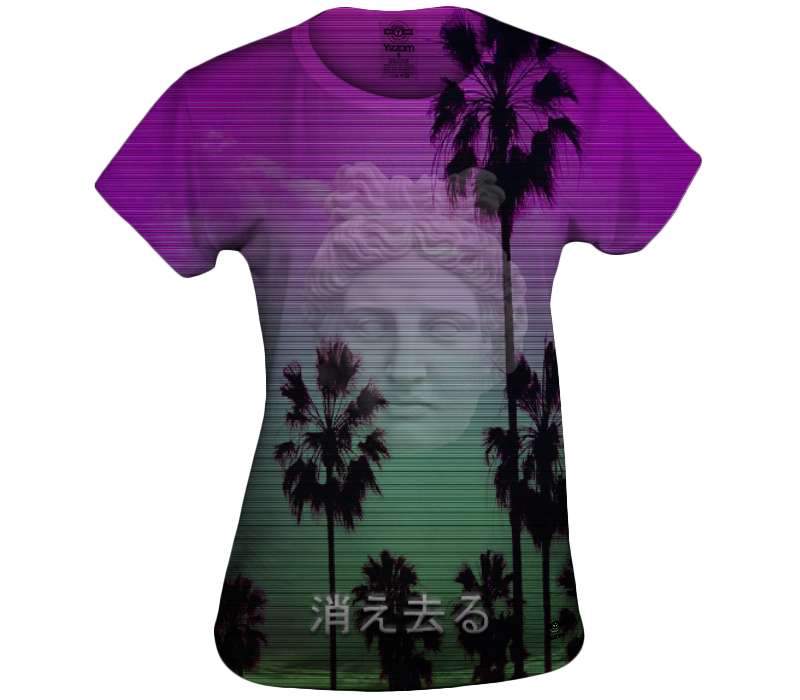 Fading Away In the Sunset Womens Top

Who doesn’t want to fade away into the sunset? The palm trees and eerie statue combine to give this print a satirical look we just can’t shy away from. 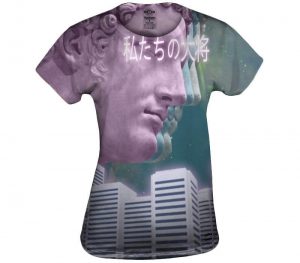 Hail to Our Overlord Womens Top

The Japanese characters and cookie cutter office buildings in this print give us the perfect swirl of commercialism meeting art. 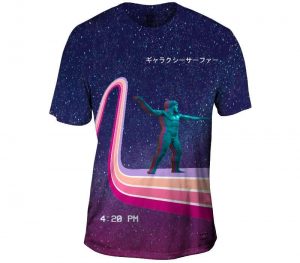 This tee is so 80s it should literally come with a Go-Bot and a box of Pop-Tarts. We just love the idea of surfing the galaxy and escaping it all!

Want more? We’ve got even more of the Vaporwave looks you love in our full collection.